I've come back to Royal Tunbridge Wells for my second annual Solitary Holiday, because I enjoyed it so much the first time (except for the lack of hot water, but I was refunded handsomely for that). The apartment is the same: comfortable, with an inexplicable lack of certain kitchen implements (slotted spoon? not essential I know, but a pity not to have one). I brought my own sieve this time.

I dropped in at the Falconry Centre on the way down, and arrived in the evening so took the opportunity to have the first sushi of the holiday, at the restaurant that I had so enjoyed last time. After a long morning in bed planning my schedule on Day 1, I started on the dress I'd promised to make for Lola II. 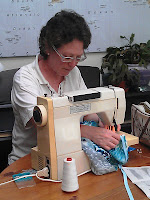 It's been a long time since I did any dressmaking, and I'm planning a separate blog on the progress of that particular project, so suffice it to say that I didn't finish the thing in a week, especially as I wanted to do some other stuff as well.

I had plans for day 2 in London - going to the Pompeii/Herculaneum exhibition at the British Museum, meeting mum and dad, and then meeting some other friends. It was a good day, but a long one. Day 3 was more relaxed - more dressmaking, then a stroll into town to do some shopping for household items. I don't enjoy shopping in normal weekends when there never seems to be much time and the shops are all crowded. There will be more shopping needed, but I got a whole lot done.

Another unplanned bonus of the week is that it's the first week of Wimbledon, so I've been watching a bit of tennis here and there, and listening to some of my podcasts and audio books. I thought I'd have lots of opportunities for listening while dressmaking, but unfortunately I can't do it - either I miss bits of the story or tennis match or I make mistakes with the sewing.

I saw a film and then wandered about some more in town - I think there are more charity shops here than in Leamington Spa, which is really saying something. I didn't even get the opportunity to see them all, because I found suitable work trousers in the second one I went to. Ate more sushi, had a bath, researched a new feed reader because of the demise of Google Reader - at the moment I'm thinking of using Feedly (I also tried The Old Reader and Feedreader). Watched more tennis. 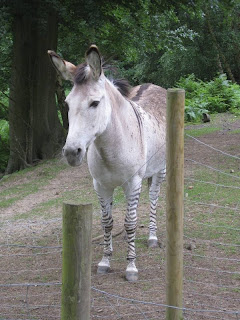 I did as much of Lola II's dress as possible without putting her inside it to check the measurements, and had a whole day left to play with. So I did a bit of research, and went to Groombridge Place, which contains quite lovely gardens (featured in the film 'The Draughtsman's Contract') as well as a forested area with stuff in it. And various animals, and (the clincher) a birds of prey centre. It was a good choice for the day with a great deal to see and a decent amount of walking, which I enjoyed. And because it was warm but mostly raining, the only other visitors were a busload of holidaying Germans who didn't get in my way at all, and a class of maybe 10-year-old schoolchildren with their teachers, who I could hear a mile off, so could easily avoid. 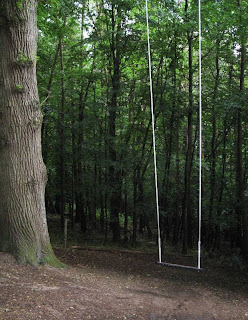 Walking in the woods in silence was wonderful, as was my decision to have a go on one of the swings. I walked past them first of all, and then stopped to reconsider. If there had been children about, then clearly I would have left them to it, but there was nobody about at all, and these were interesting swings. The ropes were about fifty feet long up to a tree branch, and I wondered what that would be like. And I'm so glad I did, because it was amazing. Obviously the arc was much longer than your standard playground variety, but the slope of the land and the weight of the ropes and swing (and me) meant that I was propelled so much further and higher than I was expecting, high over the wet forest floor, slowly and (almost) silently, with nobody about. It was a wholly unexpectedly wonderful experience. 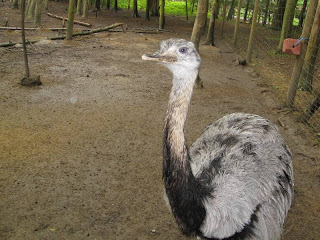 Apart from the swings there were other attractions set up in the forest, which would have appealed enormously to a) hippies (standing stone, mystic pool, some rubbish about treefolk) and b) children (things to climb on, unexpected pens containing animals - rabbits, rheas, some kind of goat, wild pigs and a zedonk called Adam who is a cross between a zebra and a donkey). For the likes of me there were peacocks, deer, tree ferns, pools with irises and with gunnera (my personal favourite of the giant plants), wooden sculptures, and I somehow got stuck on a raised boardwalk going the wrong way along a kind of assault course designed for children, such that I had a child-size doorway to get through or go back over a wobbling set of suspended logs.

The falconry displays were a washout because of the rain. There were some birds sitting in the weathering looking a bit forlorn, but there was a Jackal Buzzard which they don't have at the Cotswold centre, and which managed to fly along with a Harris Hawk before the rain came down. I didn't much like the way the 'script' was delivered to the audience (although the other four people in the audience were charmed). They also had a nice display of falconry equipment with useful descriptions, but containing terrible apostrophe abuse.

So that was the last event of Solitary Holiday #2. I'm thinking that this will definitely be an annual event, and it's possible that I might even return to Royal Tunbridge Wells for a third visit next year! 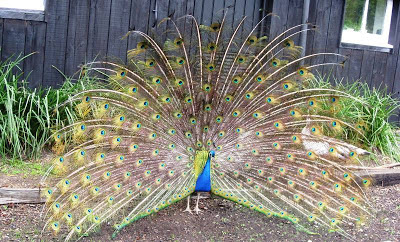