I'm guessing that one or two of you are interested in our holiday - it was fun, I gradually remembered how to ski with the help of one lesson on the second day, the weather was horrible on the first day but improved after that, Mr A absolutely loved his snow bike.

We went to Ellmau, in Austria. The resort is sadly lacking in snow, and it appears this is generally the case across Europe at the moment. In the olden days skiing would have been impossible, but thanks to snow generating technology the pistes were fine. Down in the town and anywhere off-piste, there was nothing, which meant a bit of ski removal and walking to the lift stations at the bottom.

This was the seventh ski holiday that Mr A and I have undertaken, and all have been very different.

The first was to Macugnaga in Italy, a very small resort, but perfect for first-timers. Mr A hadn't skied before and I hadn't skied since university, so we had some lessons before going out and joined group lessons when we were there. This also meant we made friends with another family and could do a bit of socialising in the evenings. The highlight of this trip was the evening meal at a mountain restaurant, which we reached with our skis on by hanging on to a rope trailing from the back of a skidoo. There were two skidoo drivers; mine went at a terrifying speed and traumatised all his passengers, while the other one was beautifully sedate and its passengers were bemused as we staggered into the restaurant.

Next time we went to Söll in Austria, taking The Boy and his girlfriend with us. They had snowboard lessons and we improved further in our ski lessons, although Mr A was already starting to have trouble with his knees. The third trip was very interesting - we went to Ruka in Finland, not noted for its downhill skiing. It certainly had nothing to match the Alps or the Tirol, but we were self-catering with four other friends in a cosy log cabin with a sauna and had a jolly good time.

The fourth trip was to Champoluc in Italy, where the hotel was adjacent to a piste and only yards from the main ski lift station. This was a huge benefit - no need for ski buses or long walks to get started in the morning or to get back to the hotel in the evening. Mr A had invested in some highly expensive personalised ski boots, but it was becoming clear that even these didn't provide sufficient relief, and this was when he had his first go at snowboarding. This holiday was particularly memorable because at the end of the penultimate day, we went for a walk and I fell over and broke my leg.

Mr A decided to abandon skis and try snowboarding for the next holiday, which was in Meribel, France. I thought I'd try it as well, and blogged about it twice. This was the least successful holiday in terms of snow-based activity, but we were in a chalet with nice people and went to a comedy gig.

Then there was a gap of three years before our next trip, to Galtür in Austria with our friends J+C, which I also blogged about. This one was notable for the food, and because I finally abandoned my attempts to learn to snowboard and returned thankfully to the skis. Mr A also decided that his arthritic knees couldn't cope with the stress of snowboarding either, despite the more comfortable boots.

So, how did Ellmau compare? The hotel was quite a long way from the town up a steep hill, which would have been bad for après ski activity had we been able to stay awake later than 8 p.m. As it was, there was a piste nearby so we didn't have to rely on the infrequent ski buses, and on the few occasions that we walked up the hill, it just felt like an extension to the exercise we were getting anyway through the day. I had a great time on the slopes once I'd remembered how to ski; Mr A had the time of his life as soon as he got on his bike. We had chosen Ellmau purely because of the presence of snowbikes for rental, and now Hans the snowbike man is one of Mr A's best friends. 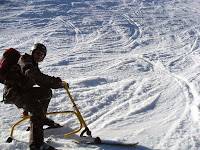 Apparently, there are two types of snowbikes: both have ski runners instead of wheels, but with one type you stand on pegs in your ordinary boots, and the other type, which is what was available here, you have short skis on your feet and sit down to ride. This meant Mr A still had to wear his incredibly uncomfortable ski boots, but there was hardly any strain on his knees, and for the first time he could actually get some speed up and do some work. The disadvantage to this was that he is still wearing motorbike gear rather than ski gear, and he described it as "spending the day in your own personal sauna." His jacket and trousers now need some serious deodorising, as well as the rucksack he stored them in.

I didn't quite manage to leave work behind, in as much as I occasionally pondered the enormous challenge that such a holiday would be if you had Type 1 Diabetes. You'd have to test loads, have snacks constantly on hand in case of hypoglycaemia, all the food is unfamiliar so estimating carbohydrate would be difficult, and all that exercise would affect your sensitivity to insulin so you might have to reduce the amount you inject by a proportion you can only guess at. And in the evening, you don't actually know what dinner will be. Without an insulin pump you'd either have to give yourself an injection per course as the food arrived (up to four injections), or take a guess at the start, count as you go along and correct at the end (two injections), or wait until the end (one injection but you'd have to endure post-meal high blood glucose).

Anyway, I've still got a week to play with before having to go back to work, and I've spent a whole day on unpleasant tasks like house insurance and self-assessment for income tax. Tomorrow I'm off to spend some family time; we'll see if there's enough time for blogging too. 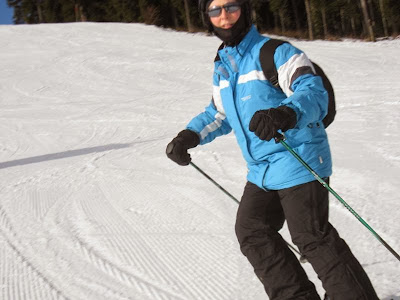