What a terrific holiday it was, one of the best I've had. Highlights:

We signed up to the food tour first thing - for about £8 each we would be taken to various food outlets and given typical Polish food to sample. Mr M has kindly provided the following report on this section of the holiday. 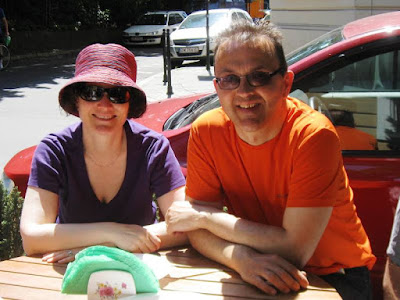 Mr M here! On our first night, and as the only person who did any non-food related research before the trip, Lola I wisely suggested we should spend our first morning on a food tour.

The tour was run by the free walking tour company, although this was one of their 'paid-for' tours given that we would be trying 10 dishes along the way and, as Dora the guide explained, it would have been very fiddly collecting money at every stop!

The first restaurant was Restauracja Samoobsługowa which was just round the corner from our hostel, and we were offered small cups of Polish cucumber soup (zupa ogórkowa) and a sour rye soup called żurek. Lola II had tried the żurek in a posh tourist place the previous night but this one was much thicker, and contained sausage and was amazing in comparison. We liked this place so much, we returned the next day for breakfast.

We then moved on to a bar the other side of the railway tracks to Pyzystanek Pierogarnia where we tried savoury (Russian) and sweet (blueberry) pierogi and some kompot - a popular Polish soft drink which Lola I & Lola II continued to order throughout the holiday but in my opinion was just like on of those fancy orange squash flavours like 'orange and grapefruit'. The pierogi were good but probably not the food of choice sitting in 30 degree sunshine!

Next was the market and the chance to try gherkins (ogórki kiszona), sauerkraut (kapusta kiszona), two cheeses, two sausages and two different sweets (fudge and chocolate). We were given 10 minutes to wander the food market, and noticed retail differences from the UK, for example Polish onions were sold without the brown skin.

Next - two kinds of cake including poppy seed cake from patisserie Caiastkarnia Vanilla which we visited again several times. After a short walk we then went deep into the tourist part of the Jewish quarter and a basement of a brasserie (Wręga) for some Hunters Stew (bigos) and bread - and then on to our final stop, a vodka bar where we were forced (!) to try four vodkas: honey, elderflower, plain and quince, which rounded off the official tour (though in my mind, the food tour wasn't completed until we had tried at least four placki (aka latkes)! 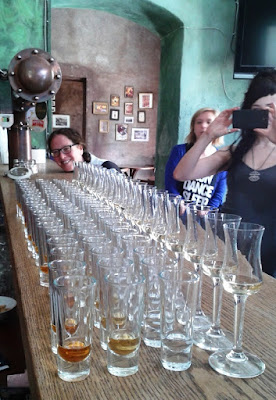 Thanks Mr M! In subsequent forays we consumed more classic Polish fare including cabbage rolls stuffed with barley and meat (gołąbki), buckwheat (kasza) and the potato pancakes (placki) which were Mr M's favourite. In terms of sweet things I tried kremówka, which is like a custard slice, and some more of Lola II's favourite poppyseed cake (makowiec) as well as more ice cream (lody) than I would usually eat in a year. 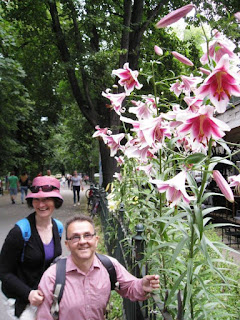 We ate in a couple of quite fancy places and a couple of basic canteen-style diners where I came perilously close to ordering tripe (flaczki) because it was quite a short word that I would probably be able to remember and reproduce at the till. Luckily someone produced an English menu at the last minute and I switched to something else. The posh meals weren't all that much better than the canteen meals, which cost in the region of £2.50. Our money went a long way. 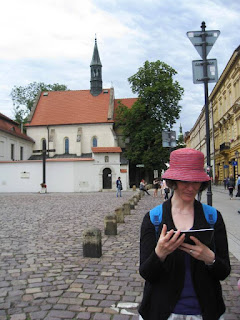 It wasn't all eating, there was a lot of walking too, and some history. I learned quite a bit about Poland's past, from its founding in the 10th century through the reigns of some imaginatively named kings to its more recent and devastating past in the years 1939-1945, and more recently as it produced the first non-Italian pope for 450 years, and he even came from a communist country. As you walk around a medieval city that feels like many other western European cities, it is easy to forget that it only emerged from communism in 1989. Berlin puts much more of its divided past on show. 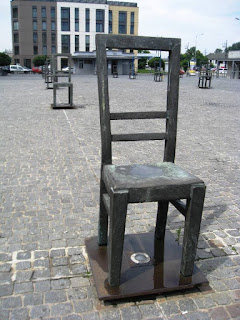 We joined walking tours of the old town and of Kraków's Jewish past - we were staying in a hostel on the main square in the Jewish Quarter (Kazimierz), and on the Jewish tour we crossed the river to the site of the Ghetto in Podgórze. There is a memorial consisting of sculptures of chairs in the square where selection took place for deportation and from where the trains set off for concentration and extermination camps. Oskar Schindler's factory is here and now contains a museum devoted to Kraków's history during the Second World War with only a very small exhibit about Schindler himself, who turns out to have been quite an unpleasant man. No matter, he saved lives and deserves credit for that. 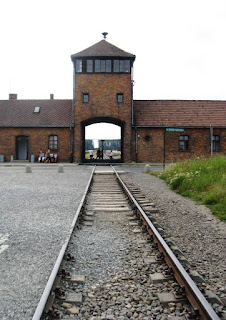 The visit to Auschwitz made less of an impression on me than I was expecting. It was very orderly, highly choreographed, as I suppose it had to be given the number of visitors that are marshalled through the site. Our guide was a painfully thin young woman who recited her script with a suitably deadpan attitude, but she occasionally picked out one of the group and aimed her speech directly between their eyes. Mr M reported this as being very uncomfortable. I was mostly preoccupied with her obviously malnourished state and wondered distractedly throughout the tour whether this job of relating the worst atrocities imaginable on a daily basis was damaging her health.

Auschwitz is a small camp and now contains exhibits on different aspects of life in its restored brick buildings. Birkenau was built a year or two later as a concentration and extermination camp and contains the remains of gas chambers and crematoria, and is much bigger but has only been minimally restored. It was a hot day when we were there, and the whole trip felt unreal, like a visit to a film set. I remember being much more disturbed and moved by the Yad Vashem memorial in Jerusalem and another holocaust museum in Israel founded by survivors (Beit Lochamei HaGetaot/Ghetto Fighters' House). Whether the Israeli monuments were more skilled at manipulating emotion or did in fact have more of an impact factor I can't say, but I was also much younger and perhaps more impressionable.


I had about a day and a half on my own after Lola II and Mr M caught their flight home, so that's when I went to Kraków's botanic garden and the nearby salt mine, which dates back to the 13th century and is inconceivably enormous. Tours are taken round a teeny tiny fraction of the tunnels on three of the nine levels within the mine, and I noticed that they count visitors in and out very carefully. They only stopped extracting salt in 2007, but I'm sure the mine still pays for itself with the numbers of tourist visitors.

The abiding memory of the trip, apart from the culinary delights, was constantly being faced with the choices that were made during the dark days of the Second World War by the residents of Kraków, Jew and non-Jew. If we were faced with those dilemmas, the deprivation, the humiliation, the choice between death or dishonour, what would we have done? How would we have behaved? Would we have fought, hidden, surrendered, dissembled, betrayed others, been brave and strong or craven and weak? Would we have died of starvation, of violence, of disease, or perhaps survived? I think the conclusion that we arrived at was that there is no way of knowing unless it happens. And cling to the hope that we will never be forced to find out. 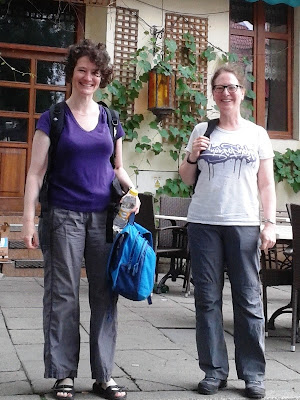