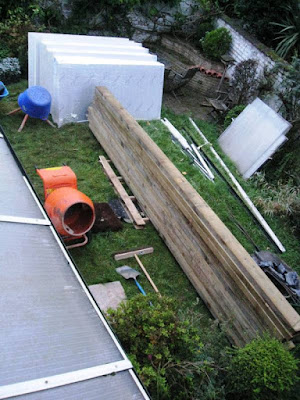 Summary of third week: walls go up, roof comes off. That's about it.

Bricklaying Ulf continued to build the exterior walls, and there was some careful discussion of how the new wall facing the garden needs to be vertical and square otherwise the doors and windows won't fit or close properly, but the old wall which abuts it is quite significantly not vertical. The final decision was to make it match exactly at the top so it would be more straightforward to put the roof on, but it would have to be bodged somehow at ground level.

Son of Ulf was allowed to build the interior wall, which is made of breeze blocks rather than lovely bricks. Blocks of insulating material are slotted in the cavity for the new walls away from the garden, and the garden wall has almost no cavity but will have insulating material on the inside. There was another round of consideration when it came to the lintels above the new doors and windows, but when I got home on Thursday these were in place. I hate missing the exciting bits. Nothing much happened building-wise on Tuesday, although I did go for a nice walk with a friend and discovered a new tearoom in Leamington which I must visit again. It is most important to keep abreast of the lunch opportunities in town. 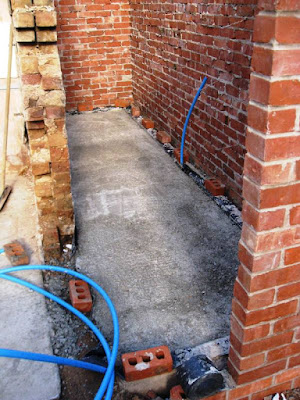 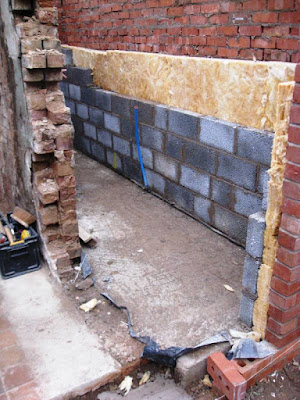 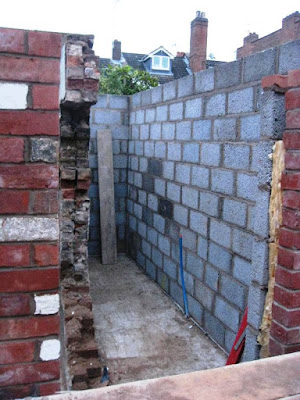 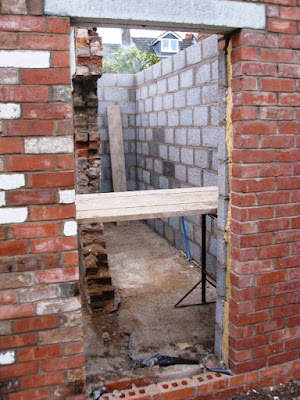 Congratulating myself on organising sufficient underwear for nearly three weeks without a washing machine, I visited the launderette this week, having prepared by finding out what coins were required and building up a stock of change. Considering that home washing machines can take several hours to do a wash I was prepared for a long wait, but these commercial machines were finished in less than half an hour. I don't really approve of tumble dryers but I made a special exception for the current circumstances, which was a good investment as there really was quite a lot of washing and I don't have the space for drying it all round the house. I had thought about taking laundry round to friends or colleagues or even to mum and dad, but it only took an hour altogether and I can easily last for another three weeks now. In six weeks time I should have a working washing machine again. If all goes well, anyway. 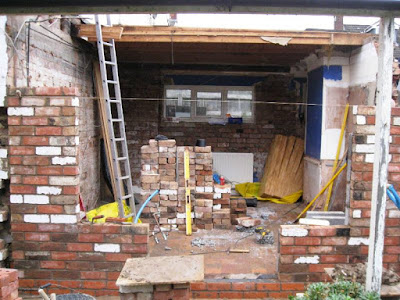 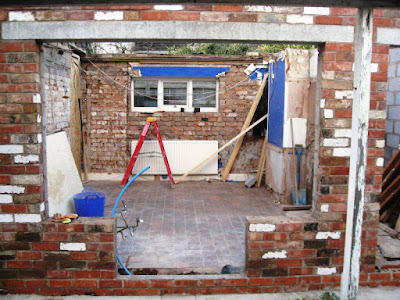 On Friday they took the remainder of the roof off, leaving the boiler covered with some strong plastic sheeting held down with bricks. I was away all weekend but the boiler still works, so that's nice.

The Maryland choc chip cookies were very well-received, and I may have to dispose of the remaining digestives and Hobnobs as they are going a bit soggy. Biscuit consumption plummeted last week and I don't know why, because bourbons are still available.