Weekend trips and a holiday

Most of the posts for a couple of months have been about work. There has been a great deal of life outside work, as I have hinted a few times. There was a trip down south to see Mr A's family, there was Lola II's and Mr M's film festival, there was a trip to Liverpool to celebrate Lola II's birthday, and there was a whole week on holiday in Berlin and Munich. Last weekend was mercifully empty (except for a tiny little badminton match) and this weekend I can relax again, although there is a plan to meet up with Lola II for nonsense and silliness (and lunch).

Mr A's dad and sister are fine, and his mum is now living in a brand new nursing home that seems very comfortable and modern, with some interesting ideas for its residents, all of whom have dementia. There is a garden with raised beds, there are the activities you might expect such as music and crafts, but there are also different seating areas - some with tables, some with sofas, some quiet, some with a view of the garden, and an interesting representation of an old railway carriage complete with luggage rack and suitcases. Mr A's mum seems as well as can be expected.


The film festival was a treat! There was a big screen, floor lighting, there were trailers, there was ice cream, an usher(ette) with a torch, a projectionist and a very appreciative audience in the three screenings I attended. The trailers were particularly good, and you can see them all in the YouTube Gulloebl channel - I have picked my favourite 'Gulloebl Chinema' trailer to show here. Mr M and Lola II must have spent ages setting it up and filming the trailers, and gave up a whole weekend to various enthusiastic film-goers. I hope they do it again, it was brilliant, although the surprise of the trailers will be hard to repeat. But if anyone can do it, they can!

The trip to Liverpool was good too, although somehow the weekend seemed shorter than it has in previous years. There was a bit of trouble with the hotel room - instead of our usual little guesthouse or B&B, Lola II had got a great deal on a large centrally-located hotel. I arrived first and checked in, but when I got to the room it had a double rather than twin beds. I thought I would phone reception rather than trek back to the desk, but the room phone had been pulled out of the wall. Back at the desk, they gave me another room, but neglected to re-program the keycard, so I couldn't get in. After a third trip to reception, I returned to what was indeed a twin room this time, but there was an odd, unpleasant smell, and when I took my shoes off, I discovered a large wet patch of carpet by the door. 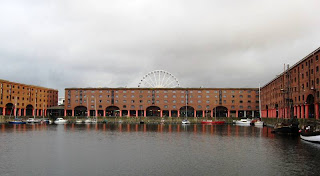 The third room was fine, and reminded us both of Great Aunt Sylvia's flat in Golders Green. What looked like a wi-fi router was up in a corner of the ceiling, so we had fine Internet reception - there was hardly any need to go out. But out we went - down to the docks, dinner in a lovely sushi restaurant, into town for a retro clothes fair, and an art gallery to finish up. 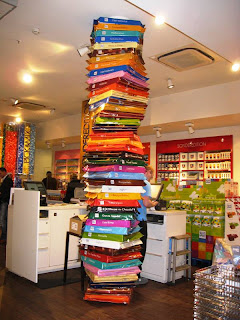 Then my most recent holiday - Berlin and Munich with Mr A. Neither of us had been to Berlin before, and as Mr A described it to a friend, we were looking forward to a week of "good food, markets, and museums about death." Which was pretty much how it turned out. We saw many sights in both cities, rented bikes for a few hours in Berlin and rode around the Tiergarten and along the canal to a large stretch of preserved Wall, interspersed our walking with museums about death, ate sushi, and did indeed visit a couple of outstanding markets.

In Munich the outstanding attraction (apart from the company of the friend we stayed with) was the Deutsches Museum - a museum of science and technology that is both enormous and wonderful, and where we spent six hours and would have stayed longer had the museum not closed. In Berlin, one of the highlights was the Ritter Sport Museum, devoted to the local chocolate, and containing a Tower of Ritter Sport, which amused me a great deal.

No more trips or holidays are planned at the moment, although I'm thinking I might return to Tunbridge Wells for my Solitary Holiday again this year, mostly attracted by the lovely apartment I stayed in last time and the wonderful sushi restaurant. Mr A and I are thinking about a camping trip to France and possibly a trip to South Wales, and he has a scheme to go biking in Bulgaria. But for the moment, while the snow accumulates on the daffodil buds, we sit on the sofa and stay snug and warm. 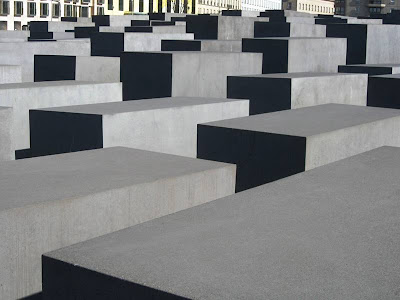