On a sunny day in the middle of August, I thought I'd record my journey to work in a series of photographs. Here is my photo-story. 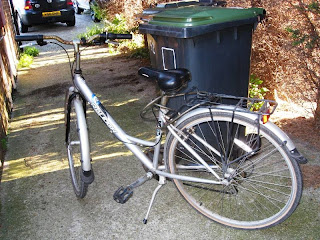 The trusty steed - actually, not that trusty, being a very standard sort of low cost road bike. It could do with a few more gears, only having six, of which I mostly use five. 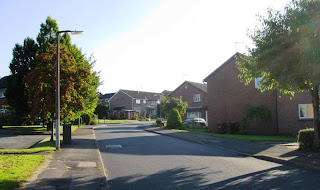 All is quiet at this time of the morning (sometimes not so quiet at 3 a.m.) Gentle uphill slope to start the ride, no problem there. 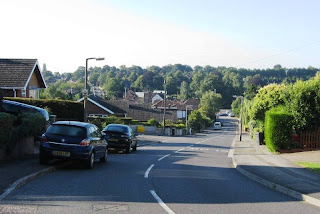 From this angle, you can't really see the gradient, but I would like to point out that we are above the roof level of the houses at the bottom. This is the killer hill that I have to climb on the way back. It does not look as menacing in the picture as it does in real life. 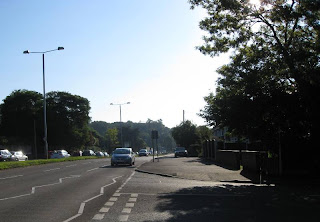 A short section where I ride along the pavement alongside a busy dual carriageway without the benefit of a cycle lane. So far, I haven't met a pedestrian along this stretch. 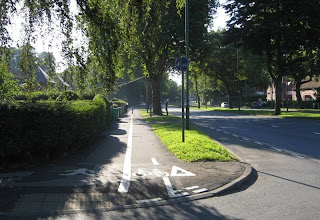 The cycle path alongside a different dual carriageway, this one not so busy. Cyclists who can keep up with traffic tend to cycle on the road, because the pavement is badly distorted by tree roots, and pedestrians often stray into the path of cyclists due to the rather narrow lanes. 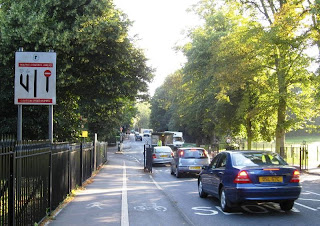 We enter the university campus, with that helpful cycle path bypassing the barrier and keeping us cyclists separated from the nasty cars. 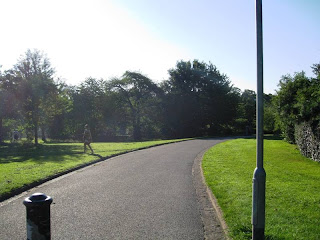 At this point, I leave the roads and cycle paths, and head down to the lake for the prettiest part of the route. 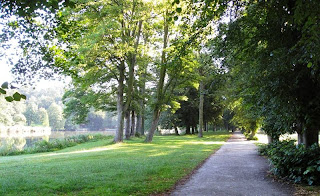 No separation of bikes and people, but there aren't many pedestrians at this time of day. There are a few more on the return journey, but we tolerate one another pretty well. 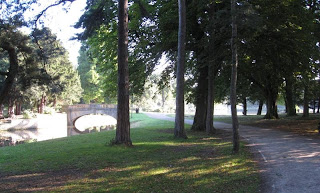 Ooh, isn't it pretty? A little bridge over a narrow part of the lake can be glimpsed through the trees. 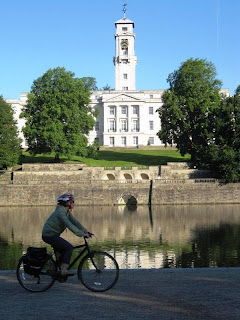 An alternative route would take me up past this university building, which involves a fairly long uphill and then downhill section. I prefer the slightly longer route by the lake, which takes less effort, although I'm told by Mr M (who went to university here) that in winter the lake route is closed at dusk, so I may have to do the hilly route instead. 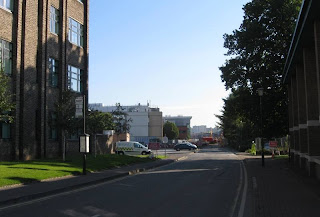 Back on the road through the university campus, and coming up to the road works. 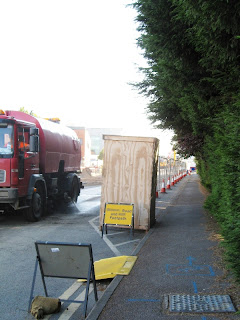 The narrowest section through the road works, where cyclists are asked to dismount, but we rarely do. I just change down to first gear and ride at walking pace behind pedestrians, especially those who are wearing earphones. It seems more polite than trying to attract their attention by shouting. 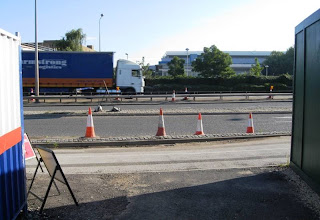 Destination in sight now, but the biggest and busiest dual carriageway so far is in the way. No matter, the cycle path continues on the pavement for a few meters... 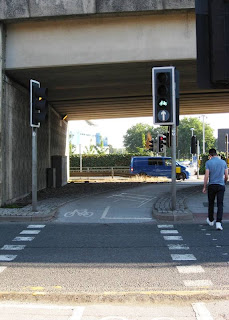 ...to the traffic-light controlled cycle crossing across the dual carriageway. 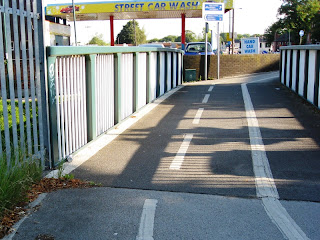 And onwards goes the cycle path - carrying on straight ahead would take me all the way to the city centre, alongside the canal if I want to. But I turn left at this point, into the hospital grounds. 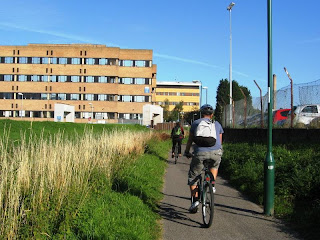 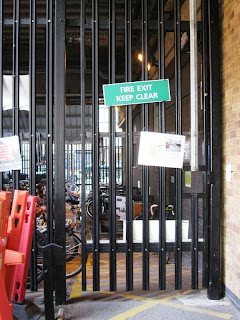 There are several of these bike cages in different locations around the hospital, accessed by swiping an authorised staff ID card both in and out, and containing rails that bikes can be locked to. They also provide a bike pump, and I think there are some basic tools in there too. 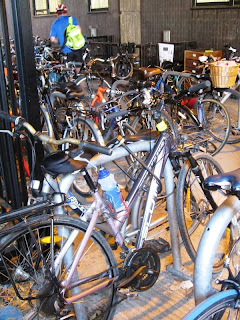 And... relax. The journey to work seems to be very slightly downhill all the way, which means I arrive without too much fuss, but the way back is therefore very slightly uphill for most of the time, with that vicious hill at the end. My legs do seem to be finding it easier each time, though.
Posted by Lola at 10:10