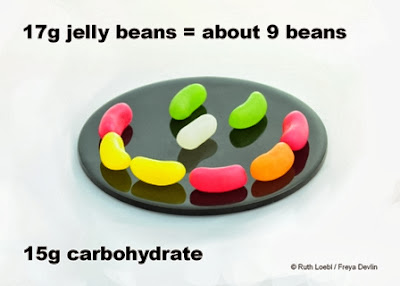 Hypoglycaemia, or a 'hypo', happens when the level of glucose in the blood falls too low. It is not caused by diabetes, because the effect of diabetes is the opposite: high blood glucose levels, or hyperglycaemia. Hypos in people with diabetes are caused by the treatment of hyperglycaemia, not by the diabetes itself.

Very few people who are not diabetic will ever experience hypoglycaemia, because the systems that manage glucose homeostasis are very sensitive to blood glucose level, and keep the concentration very steady between about 4 and 7 mmol/L. But in diabetes, these systems are pretty much messed up along with the pancreatic beta cells. Not only is the insulin response defective, but responses to other hormones that regulate glucose can be blunted too.

In someone with a fully functioning pancreas, receptors in the beta cells of the pancreas islets respond to rising levels of blood glucose with a corresponding and synchronous release of insulin. This facilitates the transport of glucose out of the bloodstream and into cells around the body for use in generation of energy, or into storage in the form of glycogen or fat. As the level of blood glucose falls, the secretion of insulin tails off but a different hormone, glucagon, is released from alpha cells in the same islets. Glucagon stimulates the secretion of glucose into the blood by the liver, either from stores or by the creation of new glucose from scratch.

In someone with diabetes, the matching of blood glucose and insulin is no longer finely tuned and synchronous, but rough and ready and very much asynchronous. When the blood glucose level falls too far or too fast, the level of insulin cannot be unconsciously adjusted down because it is coming from subcutaneous fat depots or an insulin pump rather than the minutely adjustable pancreatic beta cells. Due to the presence of insulin, the glucagon response is not as effective as it should be, and glucose may continue to be removed from the circulation rather than pumped into it.

This is a gross simplification of the many complex hormonal pathways involved in glucose metabolism, but it will do. People with diabetes who inject insulin or use medications that stimulate the pancreas to secrete insulin can't turn their insulin off automatically when they don't need it any more, and are therefore at risk of hypoglycaemia.

Most systems in the body can use glucose or fatty acids to supply their energy, but the brain depends on glucose, although it can utilise ketone bodies (a by-product of fat metabolism) if necessary. When blood glucose concentration falls, the brain signals its displeasure by provoking the nervous system to put out a series of escalating warnings, culminating in stress hormones such as adrenaline and cortisol, in order to generate a flood of glucose to fuel 'fight or flight'. This is what is responsible for the hypo warning signals such as sweating, tingling of the lips or extremities, irritability, dizziness or unsteadiness, which help a person with diabetes to realise that blood glucose is dropping. Hypo unawareness, which I referred to in the post about islet transplantation, is so dangerous because the diabetic person is unable to detect low blood sugar until it is too late.

If untreated, hypoglycaemia can lead to impairment of cerebral function (confusion, drowsiness, inattention), convulsions and unconsciousness. In most cases the glucagon response kicks in and the liver eventually secretes a load of glucose into the blood. A hypo is not pleasant to experience, and there is always an underlying fear of more serious consequences.

The generally accepted definition of a hypo is a blood glucose level less than 4 mmol/L ('Make 4 the floor'), and if this happens, then treatment is advised. If the person is using an insulin pump, then it also makes sense to suspend insulin delivery until blood glucose has stabilised.

First line treatment is to eat or drink something that contains 10-20g of fast-acting carbohydrate, ideally in the form of easily accessible glucose. Energy drinks such as Lucozade are very handy, as are sweets such as jelly babies, fruit pastilles, jelly beans, wine gums or Haribo - these all contain glucose or glucose syrup in their ingredients. Sucrose takes a little longer to be broken down and converted into glucose, but sugary fizzy drinks such as cola still work. There is some argument about whether fruit juice is suitable as a first-line treatment because its sugar is in the form of fructose, which has a longer metabolic pathway than sucrose, but real-life trials suggest that it works just fine. There are also dextrose tablets that are designed to provide fast-acting glucose, but these are fairly unappetising, which can be a good thing - you may fancy a quick snack of jelly beans, but you are unlikely to eat dextrose tablets for fun.

The quantity of carbohydrate is important, because too much will send blood glucose too high, potentially leading to a need for correction downwards and a roller-coaster ride for the next few hours, or even days. The aim is to raise the blood glucose level back above 4 mmol/L very quickly, but ideally not above 7 or 8 mmol/L. To find out if this is the case, the second stage of hypo treatment is to wait about 15 minutes and test again. If the blood glucose level is still below 4 then it's a good idea to repeat the dose of fast-acting carbohydrate, wait another 15 minutes, test again, and repeat a third time if necessary. If blood glucose is still too low after three attempts, it's time to call the paramedics.

In most cases, one treatment will be enough to bring blood glucose back up again. At this point, the game is not over, because whatever caused the hypo in the first place may still be present, so the second line treatment is to eat or drink something that contains 10-20g of medium- or long-acting carbohydrate. If it's a mealtime then the meal would do, but otherwise it could be a starchy snack such as toast, biscuits, crisps, chocolate, fruit, popcorn or yogurt. Milk falls into this category because lactose follows an even longer pathway than fructose or sucrose before being converted to glucose.

There is one other self-help option: an injection of glucagon, which can be administered by a partner or family member who has been shown how to do it. It is not as straightforward as, say, an insulin injection, because glucagon is not stable in solution so has to be prepared by mixing two components on the spot - not easy to manage when your loved one is unconscious or convulsing. But you should have called the paramedics before starting on the path to the glucagon injection, so they should be there to help very soon.

Part of the support and information we give to people with diabetes is how to deal with hypos. We may cover the many and varied reasons why hypos might occur, discuss the law as it applies to diabetes and driving, and I have even given advice about what to do about hypos underwater when scuba diving. But we were especially challenged by one patient with Type 1 Diabetes who does not read, write or speak English.

When I asked colleagues if we had anything that might help, I was sent some fairly crappy illustrations of hypo treatments, and I wanted to do better. 'Crowd-sourcing' using Facebook turned up a photographically oriented friend who volunteered his daughter to help out. I produced a specification for the items and quantities that I wanted photographed, and after some prompting, a terrific set of pictures were the eventual result. I have had them printed and laminated, and plan to use them either with those who need visual rather than written information, or as a teaching aid. I think they're great! 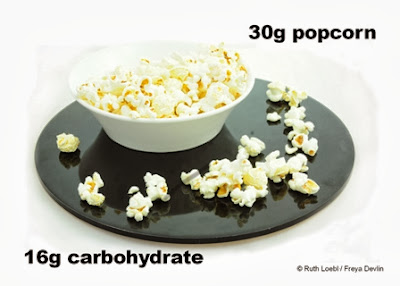