A while ago when I was entering my 50th year and feeling somewhat over-wrought, I decided to make a list of things I'd like to do. A bucket list. I didn't assign any timescales, and I don't feel any particular pressure to achieve them all, particularly if they turn out to be difficult or expensive or unrealistic.

There were only twelve things on the list, and I achieved the first one last year when I first ran 5 kilometres. As I said at the time, and have been saying ever since, that should have been the end of it, but somehow I've carried on running. In a strange way I've started to experience what might be called 'enjoyment' - not generally while I'm running, but for most of the day afterwards. I've even signed up to Run Forest Run in November, which is 10k plus an obstacle course - an account of last year's race is here.

Now I have been able to cross another item off the list. This one feels a lot like an event from my teens and twenties: those of a certain age may remember a TV programme called 'Why Don't You Just Switch Off Your Television Set And Go And Do Something Less Boring Instead' (usually abbreviated to 'Why Don't You'). I used to watch this occasionally, but I remember one episode in particular. It featured a group of kids on unicycles, and I think they were playing basketball or something similar. When I saw that, I instantly wanted to do it. By an astonishing coincidence, the college I attended years later had a unicycling club, so I was absolutely thrilled to be able to realise that long-held dream.

I had a similar feeling when I first encountered the Segway. Unlike the unicycle experience, I can't remember exactly where or when that was, but it must have been after 2001 because it seems that is when the Segway was launched. So having a go on a Segway was an item on my list of things I'd like to do.

The Segway is prohibited from public highways in the UK, but is used for guided tours in several European cities. I think Mr A and I first saw this opportunity when we visited Bruges, but unfortunately the cost was so high that I didn't feel able to justify it, especially as we would have to do as we were told and follow the guide at a sedate pace rather than, for example, seeing how fast we could go backwards...

I mentioned this recently to Lola II and she egged me on towards Google, which led to the utterly unexpected but fantastic discovery that a) there is a recognised sport of Segway polo, and b) the centre for Segway polo in the UK is... my home county of Warwickshire. This felt like finding out all those years ago that the place where I happened to be living had a unicycle club. So of course, I had to find out whether I could give this a try, or whether like city tours, it was beyond my reasonable budget. I emailed the UK Segway Polo Coach, who replied very promptly.

At the time, they were offering interested parties like myself the opportunity to join in a training session with more experienced players, for 2 hours and not that much money. At the same time they were up to their necks in organising an international tournament. I couldn't fit in with the dates on offer before the tournament, so I went along to the event to see how Segway polo was played.

It was held in Rugby, about 30 minutes drive from home, on a fairly cold and blustery day in April. The UK Segway Polo Association did a great job of organising it, and there were two teams of TV cameras, one from the Gadget Show on Channel 5 and one from BBC Click, who even entered a team into the competition. Although I wrapped up pretty warm it was really too cold to stay for the full competition, but I certainly got a flavour of it, and in a tiny roped-off section of the car park I had my first go on a Segway. For a machine that appears to be inherently unstable, it was remarkably easy to ride and steer. I'd say that anyone able to stand could easily get the hang of it within a few minutes.

So I got in touch with the Coach again after the tournament, and asked when we might be able to have a go - but things had changed. Due perhaps to the publicity, or from understandable concern about health and safety, he now wanted new players to undertake a training course before going any further, and this would now cost a great deal more than he had quoted me when I first enquired. While I thought I could get a group together and have a go for £20 a head, this seemed most unlikely for £120 each. We negotiated, and reached a very acceptable compromise. I canvassed the people most likely to be up for this kind of nonsense - my badminton-playing friends - and they responded with enthusiasm. So off we all went to the all-weather pitch at a local sports centre on Bank Holiday Monday.

First we had to sign what we referred to subsequently as 'the death waiver' - a fairly strongly worded agreement that we understood the high risk of serious injury or even death and we weren't going to blame the organisers. Then we started - first some drills around markers to practise speed, turning and stopping, then we were given our mallets to practise dribbling and hitting the ball. And then - the first casualty, with player, Segway and mallet ending up some distance from one another, and the player seriously winded. It wasn't a collision (all our other mishaps involved more than one player), but it was actually the worst injury, with a suspected cracked rib. He still played on for the rest of the session, though...

Eventually we were deemed to be skilled enough to have a go at a real game. Segway polo is played with a series of chukkas lasting 8 minutes. There are five players including one in goal - we swapped about because the goalie doesn't have as much to do as the others on the field. I was in one of the first serious crashes on the pitch, and the best tactic (developed with practice) is not to try to hang on but to part company from the Segway as gracefully as possible. I still landed pretty hard, but I was only the first of many. We weren't supposed to crash into one another, but we weren't very good at anticipating what other players were going to do, or looking in the right direction, or turning and stopping as quickly as we needed to, so there were plenty of incidents.

It was pretty difficult to score a goal, not so much due to the skill of the goalies but because were were all a bit rubbish at hitting the ball with the mallets in a predictable direction. The two sides picked at random were evenly matched, so at the end of what seemed like a very long time the score stood at 2-2 and we finished with a penalty shoot-out at an undefended goal. By this time, I was really tired and fairly sore - my collection of bruises is quite impressive, but not as impressive as those acquired by the player with the cracked rib.

Overall I enjoyed it immensely. Would I do it again? We'll see... 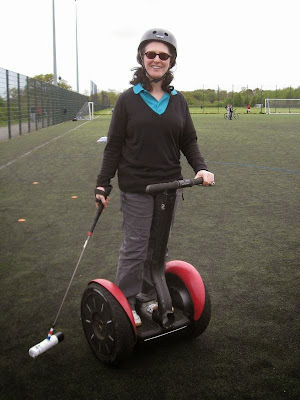