So I went to Rugby for a weekend to mooch about and get to know the town. I had a surprisingly good time - I wasn't expecting to enjoy myself quite as much as I did. I put some of the enjoyment down to the fact that I planned in advance more than usual, checking out places of interest, food emporia and even booked a ticket to the theatre. The weather was cold but mostly sunny, and even when it wasn't sunny it didn't rain much.

On Friday night I started with some basic orientation and wandered about the town centre for a bit. There were a few places I was looking for, and I ended up eating chilli with a half pint of Doom Bar in The Bank. I wasn't intending to do much more, but on the way back I passed The Merchants Inn, which is renowned for its beer, and it was early so I went in for a cheeky one. They have a vast range of beers, including more than one type of mild! So I had a half of Moorhen Mild, which was very tasty. That's a very fine pub indeed.

I went into a supermarket that a patient had mentioned - it is amazing. It stocks all manner of Eastern European food, mainly from Poland but also from Latvia, Lithuania and Romania, and seemingly no UK brands at all unless they are sourced from these countries (so for example I think I saw a Polish version of a Kitkat). There was half a wall of different sausages in the self-service chilled cabinets down one side, and then another half a wall of more sausages on the other side ready to get sliced for you. There were many, many unfamiliar products and several that I couldn't identify at all.

Best of all, for the first time since our trip to Lincolnshire, I found the frozen curd cheese desserts we first tasted there. Lola II and Mr M have been into every Polish shop and supermarket in London and failed to find any; we have now found our source. What's more, I found the same desserts in a second, similar shop in town, and I reckon if I'd bothered to go into any others they'd have been there too.

On Saturday I'd planned to go to the Visitor Centre, Art Gallery and Museum, which are all in the same building along with the town library. The Art Gallery wasn't bad, and along with its pictures it had quite an entertaining selection of papier mâché creatures. The Museum was just one room with stuff in cases as per any local museum, representing local industry. In Rugby this comprises engineering (various light and heavy engineering firms - Frank Whittle designed his first jet engine around here), telecommunications (including GEC), the railways, the cement works, and the game of Rugby including the manufacture of rugby balls. 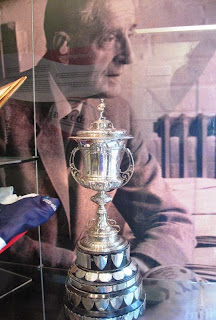 As might be expected, the game of Rugby features heavily in the tourist attractions of the town, including the Webb Ellis Rugby Football Museum and in the tour of Rugby School. The museum caters for the enthusiast, and I've never been particularly interested in the game, so the couple of rooms of memorabilia held little interest. I watched the film of how a rugby ball is constructed by hand - or perhaps how it used to be constructed by hand, it's probably all done by machine nowadays. 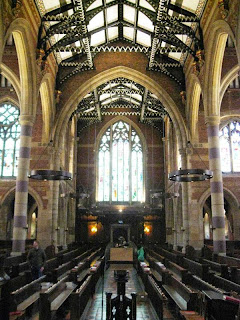 The guided tour of the school was much more interesting. Rugby School was founded much earlier than I realised (in 1567) in order to provide a free education for local boys in what was then not much more than a hamlet. It moved to its present site in 1750, which at the time was on the edge of the growing town, but is now very central as the town has expanded. The architecture is beautiful, much of its decorative brickwork designed by William Butterfield, but adorned with ivy and wisteria in a very attractive manner. I went on a tour of the main school site, although there are many other buildings belonging to the school scattered about the town. We went into the chapel, an (empty) assembly room with 19th century graffiti on the walls, a couple of courtyards, and one of the older classrooms which was a peculiar mixture of ancient books in bookcases, a blackboard, a jury-rigged data projector, a whiteboard, modern tables and a stained glass window featuring 18th and 19th century headmasters. 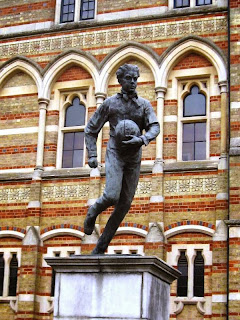 Obviously there is much emphasis on that cheating footballer William Webb Ellis who is supposed to have picked up the ball and run with it in 1823. In fact, he is probably unrelated to the development of the game, the attribution being made by another pupil long after both had left the school. Anyway, other notable alumni include Thomas Hughes (author of Tom Brown's Schooldays), Rupert Brooke, Neville Chamberlain, Lewis Carroll and Salman Rushdie. I'm thinking of reading Tom Brown's Schooldays again, although the tour guide's opinion is that the first part of the book is pretty uninteresting.

The weather was cold enough that I was now looking for a warming lunch. I'd had a cooked breakfast in a generic cafe, but a late lunch was planned at a well-regarded vegetarian restaurant called Summersault. I had a big bowl of cauliflower and fennel soup with a delicious bread roll that had a seam of real olives inside it.

I'd done a whole lot of walking around by now, so nipped back to the hotel to change before going to the theatre to see 'The Diary of Anne Frank'. I thought I'd have a nap, but realised I'd better set an alarm, which woke me in good time to get ready. The trouble was that I didn't get up straight away, so woke with a start 20 minutes before the performance was due to start. I got there just in time, and the performance was very good, especially of the young actor playing Anne, but I knew the story wasn't going to end well. If I'd delayed my visit by a week or two I could have had a less depressing experience with 'Hairspray'. 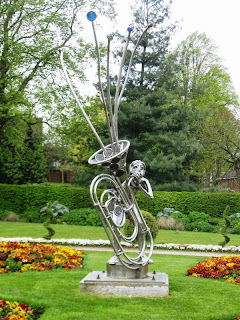 Sunday started with an impressive vegetarian breakfast at Bacco Lounge. What I'd planned for the day was to follow the 'Path of Fame', a walking tour through the town featuring a whole lot of brass plaques set in the pavement to celebrate rugby players over the years. In the Visitor Centre they updated me with the news that all the plaques had been removed, but I could have a booklet with the route in it if I wanted. In fact this was fine, because I wasn't particularly interested in the sportsmen but the booklet had interesting information about the town. It pointed out features of buildings and I saw a few nice sculptures and public art and a couple of little parks.

I tried to do a bit of shopping over the weekend, but my poor shopping skills meant I managed only food and socks. Back at the Eastern European supermarket I treated myself to a stock of curd cheese ice creams as well as a pack of ready-made pierogi, sausage, smoked cheese and pickled herrings. I tried shopping for household goods but made little progress. So it was time to come home.

The weekend was pretty good, and certainly more fun than I had expected. I put it down to planning ahead, while acknowledging also that it was very fortunate that most of the time it didn't rain.