It's been a rainy Bank Holiday weekend, although to be fair, some of Saturday wasn't bad. As I write, I hear muffled clapping, cheering and shouts of encouragement or triumph from the bowling greens, where we are reaching the end of a month of National Bowling action. Our period of exclusive entry to our little trio of streets guarded by high-vis-vest-clad doormen is nearly over.

In the past couple of weeks I've had quite a few evening appointments, including appearing on a panel for a different Diabetes UK local group from the one I used to attend until I'd had enough of their rudeness. The demographic was very similar - nobody under 50, a couple of opinionated and outspoken members, polite attention and some interesting questions. The panel consisted of two podiatrists, an optometrist, me, and a retired local GP who is fairly eminent in the Diabetes professional world. People were very interested in what the podiatrists had to say and much less interested in my contribution. I expect it's because someone's always banging on at them about food, whereas they have few opportunities to raise questions about feet.

I also enjoyed a weekend away camping with Lola II. The campsite was fine, including excellent hot showers but with fields mostly on a slope. I managed to find a relatively flat bit to pitch the tent before collecting Lola II from the station. We did a bit of campsite cooking and some eating out, but I'd brought quite a lot of salad ingredients, because a) that's what I had in the fridge, b) it's supposed to be summer and c) Lola II and I are both grappling with weight management.

We visited an old prison and a castle. The prison also contained a Cotswolds information centre, and Sudeley Castle (and Gardens) was staging an event including re-enactment of the period of Richard III, including costumes, armour, archery and music. The castle was home to Henry VIII's last wife, Katherine Parr, and she is buried there too - the only Queen of England to be buried in the grounds of a private home. There are gardens as well as the castle, and exhibitions on all sorts of aspects of historical interest. We were there for hours and didn't see everything - there was plenty to keep us occupied, and it was really hot. 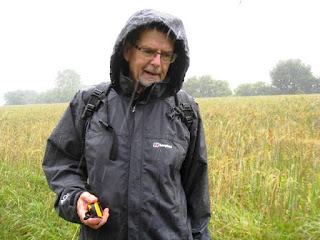 On Sunday we met up with Landrover Man and Bee Lady for a lovely walk in the countryside. LRM can always be relied on to plan a route and guide us around it, thus saving endless hours of getting lost which would happen if I were in charge.

The Weather Gods had a hand in the loveliness of the countryside, providing torrential rain halfway through when we were in the middle of a field, far from shelter. I had been too lazy to bother wearing proper boots so I was in trainers, and could wring my socks out at the end, but it was worth it - not cold, and good to catch up with bees, farmyard machinery, sheep and septic tanks. I can vouch for the impressive improvement to the vista chez LRM and BL because we were sent 'before' and 'after' pictures of the septic tank cover.

So that was a good weekend away. For the Bank Holiday weekend I decided I had procrastinated long enough and it was time to put in a bit of effort into choosing and buying a car. So early on Saturday I got up and did a Parkrun instead. I find that buying a car (or in fact buying anything except food and charity shop clothes) is really difficult and fairly unpleasant, but I found one in the end and it's probable that the ordeal will be over in a month or so. The dreadful experience is too fresh to write about now, but I'm sure I'll manage to bring further vehicular news at some point.