My first ski holiday of 2016 - how lucky am I - has been in Borovets, Bulgaria. Not a destination I've visited before, in fact I had no idea where this former Eastern bloc country was located. Even after a week there I had done very little cultural tourism, and when I asked my companion J whether she could think of any significant Bulgarians, the best she could come up with was Uncle Bulgaria, the Womble. Not strictly a native Bulgarian, as we are pretty sure that a) he's from Wimbledon, and b) he isn't real.

Having looked at the map, I now know that Bulgaria's neighbours to the south are Greece and Turkey, west are Macedonia and Serbia, with Romania to the north and the Black Sea to the east. Our flights, unusually, were at the end of the day, so we were offered a short tour of Sofia on our last day, and were guided around some of the more significant churches in that city. Even the guide couldn't think of any Bulgarians we might have heard of, except a footballer who really doesn't count.

The journey to the resort was spoiled only by too much snow. The coach driver reached the resort, but then declared that he couldn't safely continue without fitting the snow chains. This took quite a long time, during which a faction in the coach comprising young lads who'd had a good deal too much to drink proceeded to offend the various parents of young children with their inappropriate language and behaviour, and were eventually asked to make their own way onwards by taxi to avoid any further scenes.

It took another hour for the coach to proceed at a snail's pace to the hotel, which would have taken about 20 minutes walk if I'd known the way. I travelled separately from my companion J who was flying from Gatwick rather than Birmingham, and there'd been quite a lengthy booking process to try and manage this non-standard arrangement. I'd been led to believe there were no twin rooms left so we might have to share a double, but on arrival we actually had a room each, which was an enormous bonus given the amount of time I spent in my room, coughing.

Day 1 - the snow from the night before had mostly melted, but there was still enough to be getting on with. The package pricing meant that after renting skis and boots and buying the lift pass, taking six days of lessons was effectively free, so despite both of us being fully able to ski competently, we were placed in a group with five others of a similar standard under the tutelage of Yav. Yav was much more interested in the progress of two young Dutch women than two middle-aged Brits, so we stuck with him for a couple of hours but then broke away to do our own thing, especially when the group settled down to have an enormous lunch. We didn't want much more than a sandwich for lunch, the ingredients of which we shamelessly stole from the hotel breakfast buffet.

The hotel was quite smart and included a swimming pool, sauna, steam room and 'relax zone'. I'm pretty sure that this was where I picked up the germ that is still bothering me, and caused me to ski really badly on day 2, and then spend the whole of day 3 in bed, alternately shivering and sweating. I know it was bad when I didn't feel like eating anything, despite that delicious hotel buffet. 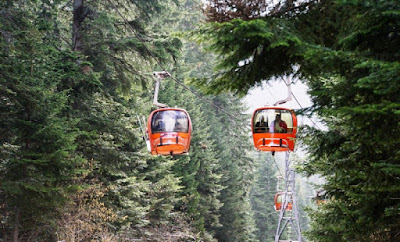 On day 4 I felt well enough to get back out on the slopes, but it was cold, windy, raining in the resort and snowing at the top of the mountain. J and I went right to the top in the gondola at the start of the day, but decided it wasn't going to be much fun and came back down again - me to return to bed, and J to do some investigation of the resort.

Days 5 and 6 were better - the weather was sunny with a very light dusting of snow on top of sheet ice. Skiing wasn't straightforward but at least we managed a few hours each day, followed by horse riding (J), shopping (me) and a pleasant forest walk (both). My shopping trip resulted in some mystery Bulgarian salami which has turned out to be absolutely delicious, several bars of Romanian chocolate, and a little ceramic tile decorated with a lizard, which makes me smile whenever I see it.

We met many different nationalities and heard some interesting stories, including from the portly English chap dressed as Superman who was part of a stag party. He told us that the groom was back in the hotel, having broken his hip falling over while out in the resort the previous night. Not to be beaten, another group who overheard this story told us that one of their number had broken his ankle falling out of his bunk bed in the hotel. This conversation all started when we were asked for some painkillers from a man who'd hurt his knee before his holiday even started when he went for some practice at a ski slope at home.

The two of us escaped unscathed apart from my ongoing cough, and my return trip was entirely uneventful, which is how I like it. Apart from not enough snow and my illness, it was a fine holiday, and on reflection I have to say the absolute highlight was the wonderful soup served in the hotel each evening (two different kinds every day), along with the menu of fifteen different flavours of hot chocolate. I only discovered the hot chocolate menu towards the end of the trip, and only managed to sample one - dark chocolate and coffee flavour - which was very fine indeed. 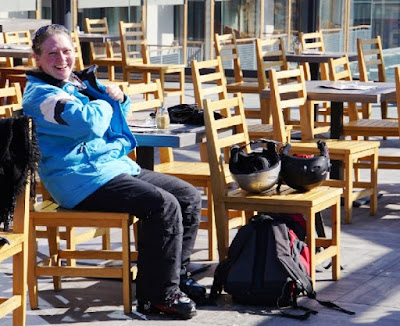 Photo credits: in this post they're all J's pictures. My photos are trapped on my camera since my laptop stopped recognising the memory card. I have ordered a gadget that should allow me to transfer them, but it hasn't arrived yet. There are a couple of photos on my phone, but hey, I haven't got round to dealing with them yet. You'll probably get a random skiing photo in some future post.
Posted by Lola at 11:32