Another stupendous weekend in the company of Lola II and Mr M, this time at the Leamington Spa Food and Drink Festival 2016. Before they arrived I squeezed in an attendance at Parkrun, deciding not to actually run because of the time it would take out of my schedule (not so much the run but the cleaning up afterwards). My volunteer role was Finish Token Assistant, where I hand the finish tokens to someone else who hands the finish tokens to the runners. Unlike the Token Finnish Assistant who is an unnecessary Scandinavian helper. So that's clear.

Unfortunately Saturday was wet and a bit miserable, but it did mean that there weren't too many people clustered around the Food Festival stalls in the quest for samples. I think we overdid the samples, as usual, mixing sausage with cake with cheese with fancy oil and vinegar with syrup pudding with hot chilli sauce. It all ends up in the same place, but makes for a fairly odd gastric experience. I lunched on an overpriced pancake with maple syrup, which collected in the bottom of the cone and dripped down my coat sleeve. Call me Lola Sticky Hand (and that's not a hand that's like a stick).

Knowing that we would return to the Festival the following day, we had other jobs to do on Saturday. Lola II and Mr M are in the midst of renovation - not to the extent of the LTRP, but they have stolen Ilf who is spending a couple of weeks actually staying in their house while he decorates and fixes various household essentials. Luckily Ilf lives near me and does not have to stay in my house when he works on Lola Towers. Unlike Lola II and Mr M I am not good with visitors, let alone visitors whom I do not know well. 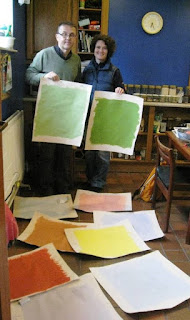 Anyway, there has been much discussion and negotiation about paint colours, and in order to try and resolve the impasse about their choice for their hall and stairs we each chose 2 tester colours from the local Dulux trade shop using vouchers from the Food & Drink Festival Little Book of Vouchers. Because of the difficulty in reaching a decision, I volunteered as intermediary and painted each of the colours plus a few more I had hanging around on lining paper, numbered the samples and Lola II and Mr M rated their choices. Nobody was more surprised than they were that they both chose the same colour as their top choice!

On Sunday we paid a quick visit to a friend of Ilf's to pick up some necessary paint for him, and then back to the Food & Drink Festival. This time we were a bit less enthusiastic with the samples, leaving room for some real food. I had the allium-free vegan option (salad, felafel, houmous, salsa) while Lola II tried hard to resist but went for the most delicious allium-tainted samosa and dip. Mr M met a friend and went round with her so I didn't see his choices. And I'm blaming my week-long self-imposed chocolate restriction, but I bought a huge jar of sponge, chocolate and ganache confection. In my defence I did share it, and even made it last until Tuesday. 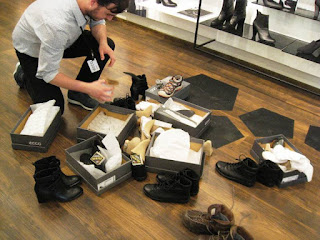 Again we had other jobs to do, and Lola II was after some shoes. The little book of vouchers included 20% off at a local shoe shop, and both I and the shop assistant were 'entertained' for some considerable time by Lola II's attempt to buy shoes. The assistant even tried to sell me some shoes, and persisted despite my clear indication that if he brings me any to try on I may try them on but I'm not going to buy them. Lola II gave him much more to do with different socks, styles and sizes, but achieved her goal in the end. I took a photo of the scene of devastation.

Other notable events of the weekend: the cherry chocolate tart (bad news for the self-imposed chocolate restriction), the disappointing fruity buns, the charcoal cheese, the pork pie and the wood pigeon breasts which are now in the freezer. I hope that the pigeon will be less hassle to cook than the hare that I bought from the same stall two years ago.