Another successful and enjoyable holiday this time with Exodus, which offers a multitude of mostly activity-based holidays - walking, cycling and 'culture' for example. This one included five days of guided walks in southern Spain. one day in Seville, and a bonus day in Ronda because our flight home wasn't until late evening on the last day. 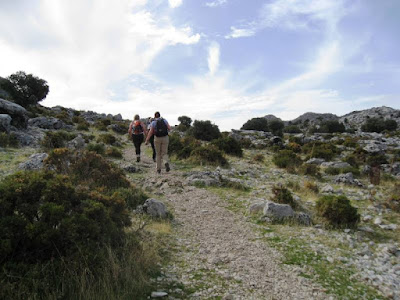 We were 14 in all, mostly women, based in a rural farmhouse (Cortijo). The weather was perfect for me, mid-20's Celsius with a breeze and no rain until the last day. The only fly in the ointment was the collection of bites that I brought home and have been scratching ever since. I shared a room with a Scottish woman who snored, but earplugs soon sorted that out. Our guide was an enthusiastic woman called Tina who has previously worked on cruise ships, and she was excellent - organised, helpful, cheerful, and so enthusiastic that every walk was her favourite. 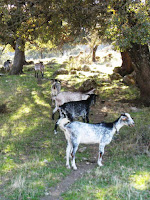 The scenery for most walks comprised endless vistas of olive trees with occasional holm oaks whose acorns fed the Iberian pigs. Three huge pigs were kept in a pen down the road from the Cortijo, which was at the top of a steep hill, so we often found it helpful to stop and view the pigs to catch our breath. The nearest village was Algamitas at the bottom of the hill, but we didn't stroll around there, just walked or drove through on our way to another location. The soundtrack in our heads during many of these drives was 'Never Gonna Give You Up', as we were assured that the minibus driver had once had Rick Astley as a passenger.

As well as the olives we caught sight of quite a few fruit trees including pomegranates, figs and citrus of all kinds. Animal sightings included the aforementioned pigs, horses, goats, sheep, cows, donkeys, turkeys (not free range), deer and many vultures which we were informed are Griffin vultures, known locally as Leonardos. We spent a few minutes watching in fascination as a dung beetle manipulated a ball of dung significantly bigger than itself. 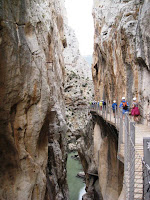 Most days we saw nobody else throughout the day's walking. On the next-to-last day, however, we walked the 'Camanito del Rey', which for most of its length is a boardwalk attached to the side of a gorge. Tickets for this tourist attraction are timed, and walkers are required to wear helmets to prevent accidental head injuries on overhanging rocks. Like the days in Seville and Ronda this was a day when we had to compete with other tourists. It was an impressive gorge, only recently re-opened following renovation of the walkway. Rickety remains of the previous path were present for some of the way, and I discovered that I have gained a good deal of nervousness with heights. I used to be fearless, but no more. 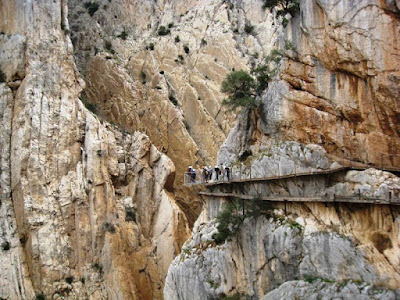 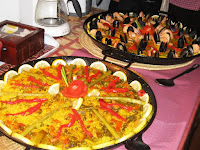 The catering was excellent and local; one of the advertised attractions of the week was the opportunity to view the construction of an authentic paella by the Cortijo's chef, Maria. Tina the guide was also fond of surprises, and we were given an unexpected picnic on one of the days walking. There were far too many opportunities to eat too much, so I felt lucky to have gained only half a kilo during the week.


We were left to our own devices in Seville, and I climbed up inside a construction known as 'Las Setas' (The Mushrooms) to have a look over the city from above. I went on to a local market where I plucked up courage to buy some chorizo, then walked back to see the Real Alcazar palace.
Both palace and gardens were beautiful. I've never been to Cordoba or Granada, but I believe the Moorish style is very similar.

The group gathered at the end of the day in Seville for an hour's professional flamenco show with a male and female dancer, a singer and a guitar player. Back at the Cortijo on the final evening we were entertained by a private flamenco show from two local girls with a CD, which I actually enjoyed more.


In comparison with Seville, Ronda was smaller, more crowded, and it rained. I still managed to avoid the downpours, once by being inside a museum and the second time inside a cafe. The museum was fairly typical of a local museum with the obligatory pot fragments from Roman times and displays of local geology.

The other holidaymakers on the trip included three Irish, three Scottish and a whole clinic of health professionals. As well as myself there was a retired Diabetes Specialist Nurse, a Pharmacist, a Physiotherapist, a Pathologist and an Orthotist specialising in shoes. I was assured by a regular Exodus holidaymaking friend that there's always one difficult person every time, but we all got on very well. Most of us were planning our next trip before this one was over.