A long and tedious post about modern audiovisual technology

Since the visit from Mr and Mrs MXF and the Revelation of what technology is capable of, I am now experiencing it in real life.

Broadband brings the internet to Lola Towers along wires as far as the router, and from there onwards we have wifi, which nowadays forms the backbone linking everything together. Some of my gadgets were already making use of the wifi - the laptop I'm typing on, the tablet I mainly used to play my chosen radio programmes on BBC iPlayer, and my phone.

In contrast, my old iPod has to hook up to the laptop to suck up all my music, podcasts and audiobooks through a wire. I can listen to the iPod through earphones, but I also have a speaker for it in the kitchen. I love the iPod because its battery lasts for ever, and it fits in my pocket, and as well as listening on the kitchen speaker I can plug it into the car stereo and listen to my music and podcasts and audiobooks, and it remembers what I've listened to and starts up exactly where I stopped, and it holds every single CD and audiobook I've ever bought and is still very much less than half full. But neither the iPod nor its speaker is wifi enabled, and neither was the television, and neither is my ancient hifi system in the living room which can play records, CDs, analogue radio and cassettes (except I found out last week it can't play cassettes any more).

Then the television expired, and it was time to think about what the modern world can offer. I'm not actually interested in broadcast TV - the few programmes that interest me might be available via the Internet, and I don't care if they aren't. What I wanted in the kitchen and living room was the option to play audio directly from the Internet as well as all the stuff I've bought over the years, and I wanted a new television in my future 'Screening Room' where I hope to stage the Gulloebl Film Festival (Midlands franchise).

After The Revelation:
1. Spotify

Spotify is an Internet repository for all the music in the world. Actually, as I have delved deeper I have discovered some of the more obscure music that I have acquired over the years is not to be found in Spotify, but 99.9% of all the music in the world is there. Using the phone app or the web player I can play individual tracks and albums, and create playlists of my own or listen to those compiled by other people. If I want, Spotify will play me music that it thinks I will like based on my previous choices, and so far it has been broadly correct in its assumptions. And all of this can be sucked off the Internet to my wifi-enabled speaker of choice, for free if I'm prepared to listen to a 30-second advert every half an hour or for a monthly subscription if not. I don't have to own any of the music to listen to it as long as my speakers can hook up to the Internet via wifi. I may never have to buy music ever again. I hope the artists get a cut from Spotify or we will have no more musicians able to make a living.

I bought a gadget from Google whose function is 'Chromecast Audio'. When plugged into the old kitchen speaker and configured via a website it connected the speaker to my wifi, so I could play anything from Spotify on my kitchen speaker. Unfortunately the ancient living room hifi didn't have a spare line-in socket, although now I plan to investigate whether I can make use of the line-in socket so recently vacated by the cassette player. Then (see below) I installed a wifi extender and the kitchen speaker option disappeared. Then I switched broadband supplier and eventually I bullied it into appearing on the network but I can't use it as a speaker. To be honest I almost lost the will to live with the Chromecast Audio and ended up actually shouting at it and then I broke the tablet by hitting it in frustration. So I'll save that problem for later.

Television used to be delivered by a broadcaster via an analogue aerial plugged into the back of a large cathode ray tube that allowed you to watch what they chose to broadcast at the time they chose to broadcast it. Then the number of channels increased dramatically, satellite and cable transmission options were introduced, everything went digital, and now you can watch all sorts of things any time you like within certain constraints. Despite all this flexibility, or perhaps because of it, I stopped watching television programmes some time ago. But I carried on using my old cathode ray tube to watch DVDs until it died.

Mr MXF helped me choose a suitable TV which arrived a couple of weeks ago. It is enormous, but weighs less than the set that it replaces. The most interesting thing I have realised is that the fundamental function of a television in the 'olden days' (to watch television programmes as they are broadcast) is the only function that I can no longer use it for, because it isn't connected to an aerial, satellite dish or cable. My new 65-inch television screen is, in reality, a huge but stupid computer screen without a keyboard. It connects to my wifi and will play music from Spotify as well as television programmes and other stuff streamed from the Internet, most of the time. There are still a few things I haven't managed to stream, such as BBC radio.

Many people don't even use a DVD player any more because they watch films streamed or downloaded from the Internet, but I am still using the DVD subscription service because they have the films I want and Netflix and Amazon don't. But this new television will play Blu-Ray and Ultra High Definition movies, which Mr MXF wholeheartedly endorses. My DVD player can cope with Blu-Ray, but I'd need a new one for UHD. Due to 'heritage' issues I haven't yet watched a Blu-Ray film, but one should arrive pretty soon.

This is a bit of kit that hooks up to the TV and/or wifi to produce directional sound, i.e. makes your ears think there is sound coming from all around. It comes with a nice sub-woofer for super bass noise too. I got it for films really, and it will sit in front of the TV most of the time, but I've also tried it out separately in the living room for streamed music (e.g. Spotify) and it works OK as long as the music is actually being picked up by the TV and sent to the sound bar via an HDMI cable or wifi. It's just a bit of a nuisance having to carry the bar and speaker from room to room.

While Mr and Mrs MXF were here it became clearer that the kitchen is a bit far from the router and the wifi signal was quite weak. The gadget to fix this plugs into an ordinary power socket and boosts the signal, and should be as straightforward as that, but it seemed to disrupt the connection to the Chromecast Audio gadget until the new broadband came into play, and maybe it doesn't now. More investigation is needed. But the kitchen wifi signal is now excellent.

So now I have a super huge high definition screen, great sound from DVDs or streamed from the Internet on the TV in the Screening Room, or in the living room if I physically move the sound bar and sub-woofer (which aren't intended to be portable), and the old hi-fi in the living room to listen to CDs (and analogue radio and vinyl but not digital radio or cassettes). I'm still able to use the iPod for music, podcasts and audiobooks but only on the kitchen speaker. It would be nice to be able to listen to all those things through the sound bar, but it looks as though I need one more item to connect my laptop to the TV (an HDMI to DVI cable). Then I could think about either trying to link the old hifi to the Chromecast Audio gadget so I can play digital sounds through my old amp, or I could get new wifi speakers.

But first, I really ought to finish the kitchen. Just the tiling left to do. 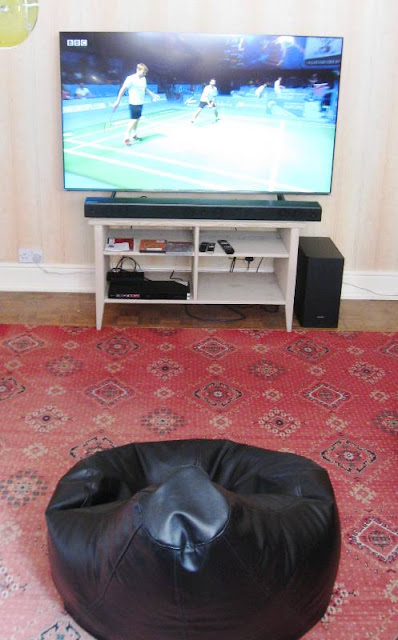