My last trip to London combined a study day for work, staying with Lola II and Mr M, and a gathering for mum's birthday. I'm writing about the study day separately, and because it's taking ages and I've been rather busy, I'll do a quick round of other news in this post.

Mum's birthday gathering was slightly marred by Lola II losing her handbag, but the story ended happily when it was handed in without loss. The following day I accompanied Lola II and Mr M to a Games Cafe in Richmond where we tried out three new games: Quirkle, Exploding Kittens, and Sushi Go! We liked Quirkle best.

Between then and now I had a busy week with the usual work, a District Council meeting on Monday evening, a car mini-service, chimney sweep visit and meditation on Tuesday, a trip to Birmingham on Wednesday evening, badminton club on Thursday evening and a match on Friday evening (we lost, but it was good fun with friendly opposition, which isn't always the case).

The Council meeting was about the proposed replacement of a decaying car park combined with the relocation of elderly Council offices. Many local businesses are dismayed at the 'parking displacement plan' and feel that shoppers will be put off by a potential reduction in car parking spaces in the town. Residents are also up in arms at the loss of 42 mature trees (although more saplings will be planted in their place) plus the failure of their planning proposal to follow the Council's own guidelines of including 40% affordable housing. By attending the meeting I achieved my aim of understanding what all the fuss is about while being depressed by the poor standard of debate and the attitudes and arrogance of the Council leader and officers.

The trip to Birmingham was much more fun: I went to a meeting of 'Skeptics in the Pub' at which The Angry Chef was speaking. As the name suggests he is a chef, and I have been following and been hugely entertained by his profanity-filled blog for some time. He writes very eloquently and at length about the rubbish that is promoted by celebrities and others aimed at telling people how and what to eat, or 'nutribollocks' as he terms it. I enjoyed the meeting a great deal - he talks a lot of sense backed up by proper levels of evidence, and I bought his book and he signed it for me. 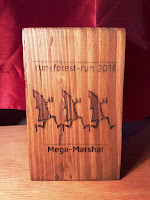 This weekend was the fifth annual 'Run, Forest, Run' event in Surrey, where this year there were more runners than ever. Lola II and Mr M were marshalling out in the forest along with J from Family JJL&J, and another two J's actually did the 10k plus obstacle course. I was again put in charge of the kitchen, and apart from running out of bacon and teabags it all went very well. I was very proud to be awarded the 'Mega Marshal' trophy for services rendered to mass catering.

Weight loss has stalled, but it has remained 4kg below what it started at (rather than the 5kg I was aiming for), so I'm going to take that as a win. Nothing new with the LTRP except that I briefly went into a carpet shop and now I need to decide who to invite to estimate for the job and whether to choose wool or synthetic fibre (any opinions from readers would be very welcome).

The television saga continues - the price of the TV I am after did drop to a level where I was happy to buy, but by the time I got to the website in a secure WiFi zone there were no more in stock. Stock suddenly appeared a week or so later, but the website claimed that delivery was not possible to my postcode, and when I followed that up with the retailer we agreed that there was actually no stock and it was a website error. However, I guessed that the American phenomenon of Black Friday might influence prices, and so it did. The television appeared on the website at an even lower price on Thursday evening, I placed an order successfully, and all being well it will be delivered today. 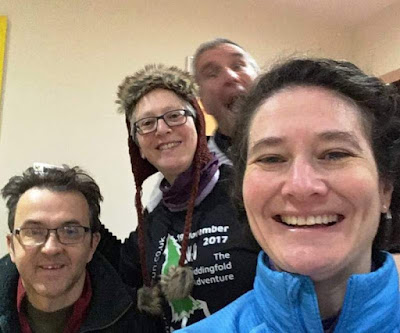