A Revelation while camping

So I gave you all the news from work last time, now here's the rest of it.

I went to the dentist, routine appointment, but nothing is routine at the moment. The door's closed, ring the bell, my temperature is checked before I come in, I have to wear a face covering and so does everyone there, all possessions put in a plastic tub, no magazines or water in the waiting room, perspex screen in front of reception. Once I'm in the chair and the hygienist and assistant are fully covered up I can take my face covering off. My usual hygienist has had a baby so I've got one who's never met me before, and I get the usual furrowed brows at the state of my gums with some new proposal about how things might be improved - non-surgical suggestions this time. Many things have been tried and failed to help, but it's nice of them to keep coming up with new ideas.

On Saturday morning there was a very exciting incident at home, when I heard crashing and thumping noises in the house, suggestive of an intruder. With hindsight I didn't treat this with the degree of wariness that perhaps I should, but luckily for me it turned out to be a burly woodpigeon in the living room which must have entered via the chimney as all the doors and windows were shut. Again, luckily for me, the chimney hadn't been used much since it was last swept so there wasn't much soot, and the crash was due to an ornamental pot knocked off the windowsill onto the floor. I opened the French doors and burly pigeon exited without any fuss, and hadn't left all that much mess behind it, and I set up the shards of the shattered pot in an artistic manner and reflected on the impermanence of all things.

Last thing before going on holiday was that as I was driving away, I noticed that the pub door was open and there seemed to be some work going on. The workmen were not all that forthcoming about who was ultimately in charge, but it's encouraging to know that the building won't become derelict. It's a very attractive location and I'm sure someone will see the potential, so I just hope it will be a sympathetic operator. 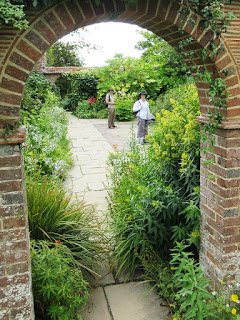 There! We've made it as far as the holiday, which was camping in Sussex near Battle, with Lola II and Mr M, via mum and dad, who are well (all things considered). It was a woodland campsite, some of the indoor facilities were closed but there were flush toilets as well as compost toilets, outdoor bucket showers if you were interested, and lots of hand sanitiser and disinfectant sprays. Lola II and Mr M like a nice fire so they cooked on that while I stuck to the less exciting camping stove for what I consider to be more appetising results. And I saw my first glow worm! I had no idea we had glow worms in this country.

The next day was a bit wet and windy but we went to see what Battle was like, and ended up inside the Abbey, wandering about and listening to a talk all about the years leading up to the famous Battle of Hastings. Then, for the first time in many months, we went INSIDE a cafe and had lunch. There was hand sanitiser, contact details had to be given, there were screens, and there was also... cheese. I haven't bought proper cheese since starting the diet because it simply has too many calories to be worth it, but this was a holiday and the portion wasn't too big and it was truly delicious. We went inside a cafe on the next day too, and I had more cheese. 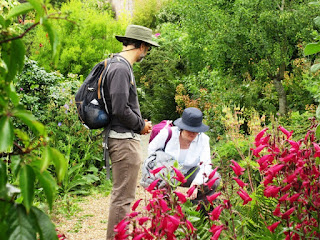 We also went to Great Dixter gardens, which was beautiful and will provide flower portraits for the blog for a few months. But the significant event of the camping trip was when I went for a walk with Mr M, and he asked about work, and I said that on the whole it wasn't brilliant, and in that moment I had a Revelation: I decided that I didn't have to keep doing the same job, and I could probably find something else for two days a week that would use more of my brain and require me to spend no more time with my current colleagues.

My plan was to ask all my friends in different walks of life whether they were aware of any jobs at all, and follow leads, and generally take a few months to see if anything useful came up. It wasn't going to be much fun but if I could cobble together something that worked it would be worth it, and I felt vaguely optimistic as I headed off for the next bit of holiday, which was to stay with friends in Surrey: Mr MXF and Bee Lady 2 (BL2), for now I have another friend with a hive. And the name sounds better than Chicken Lady or Mrs MXF. 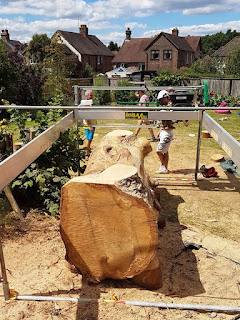 Mr MXF and BL2 and their two grown-up children are always full of schemes and activities: running, swimming, cycling, tending their small woodland, ecology and sustainability, village activities such as the huge November 5th village bonfire, keeping chickens and now bees, and hosting the 'Run Forest Run' annual running and obstacle course event. My friendship with Mr MXF goes back to university days; BL2 was my companion in 2016 when we went skiing in Bulgaria.

Their acquisition of a small patch of woodland has brought about much wood-related activity and consequent machinery. As a result of a too-tall eucalypt in their garden being taken out during the week there was a vast amount of wood to be cleared, but many neighbours willing to wield an axe and take a barrow-full. A three-meter length of trunk with a diameter of about a meter lay in the garden, and the plan was to use an enormous chainsaw in a rig to cut slabs of it which would be dried and seasoned and eventually turned into table tops. I mostly watched and photographed, but also had a go on the rig for one cut, just because I'll try anything once. 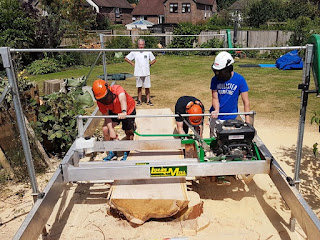 But as I arrived I was still full of the Revelation, and as I described to Mr MXF my idea about finding something else to do for two days a week, his eyes kind of opened wide, and lit up, and he said "You could work for me!" So that's what we're going to explore, and it might not work - my brain might not be right for the sort of work he is thinking of - but it might work and that is really very exciting. But it has made it much more difficult for me to face my current two days at the Diabetes Centre, imagining how I might not have to do it for much longer.