It's so nearly finished! This was the second kitchen installation week, when all the worktop shaping took place. The worktops are made from an acrylic material, and shaping them involves grinding the unwanted material into fine dust resembling talcum powder, which floats oh so gently throughout the entire house, coating all that it touches with a white scum. Despite this, the worktops look great.

In fact there was no dust generation on Monday when there was too much snow for Team Ylf  to get here. Ulf, however, was on a new job that couldn't progress very much in the snow, so he came round and finished some of the loose ends relating to the stairs - filling in the holes in the parquet and fixing skirting boards.

Ilf came round as well, because there's lots for him to do and I wanted to book him for the New Year. He made some useful comments as well as admiring the job, and all being well he'll be doing some painting and varnishing in February.

Back came Team Ylf on Tuesday, and I'd had time to think about the draining board over the weekend. I had been so specific about the design of the draining board that to some extent it dictated the type of material we used for the worktops. Apparently, having draining board areas on both sides of the sink is so unusual as to be barely achievable, but they did it. The only problem was that while the surfaces were angled as I wanted so that water would drain into the sink, they were totally smooth where I was expecting grooves. Again, I had no idea that allowing the water to drain along grooves into your sink was something that had to be specified in particular. Team Ylf were informed of my outlandish request, and returned with a template and router and made it so. Then I realised that the other sink in the utility room has no draining board at all, smooth or otherwise.

By Thursday all was completed except for some bits that had been damaged or mis-ordered and won't be with us until the New Year (one door, one handle, one sink waste pipe, one upstand and one sill), so I have another visit from Team Ylf to look forward to. I'm not sure I have the strength to request that a draining board is cut into the utility room worktop, but I've got to go back to the shop anyway, because of the telescopic rails for the oven. These were supplied but not fitted, and I can't work out how on earth to put them in. I tried using YouTube but even the videos there weren't much help.

Although the work was completed, there was dust in every crevice. I've done a ridiculous amount of cleaning - not deep cleaning, it's true, but time consuming nevertheless - and then I'm gradually introducing kitchen gear into the new space. Everything that comes in also has to be washed because of the dust in the rest of the house, so I'm taking it slow. It's been harder than I expected to decide where to put things. I'm also having to think about starting to buy in new stuff that I need, like bar stools - the one in the pictures came from Freegle, and I rather like the splash of colour in its very neutral surroundings.

The electrical connections have not yet been made (because they need the appropriate safety certificate) so I haven't yet got a working hob, oven or dishwasher, and the microwave and fridge are still in the lounge together with the washing machine. But I can make tea in the kitchen and I had breakfast there for the first time on Friday. 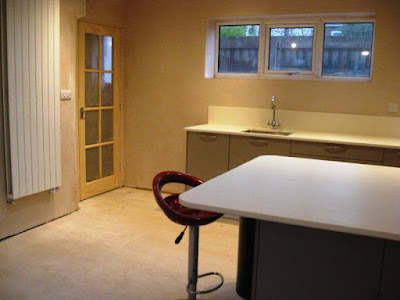